2km to be Rerouted

2km of trail between Gungin and The Dell remains only roughly marked, as realignments were being considered in the area, given heavy MTB traffic. These realignments have been confirmed and trail work will take place in 2022 to have the Kattamorda HT rerouted to the west of Mount Gungin before it will reconnect ultimately to the original trail at The Dell. When this work is done, the Kattamorda will no longer go to Mount Gungin summit.

Markers have been attached to the posts from Hardinge Park to Mt Gungin (15km). Work continues northbound, but the 2.2km between Mt Gungin and Mundaring Weir Rd remains unposted. Realignments are being considered in the area, given heavy MTB traffic.

One short section of trail remains to have posts installed. That comprises 2.2km between Mt Gungin and Mundaring Weir Rd. Markers for the posts will likely not be ready until at least September.

Posts - Over Half Done!

Roughly 19 kilometres of trail has had posts installed. This includes the southwest trailhead at Hardinge Park to Mt Gungin (15km), then from The Dell to the west side of Mundaring Weir (4km). No markers are on these posts yet.

Four kilometres of trail has had posts installed in the Pickering Brook area. No markers are on these posts yet. Marking will continue through at least all of July, as volunteer time and weather permits.

Our website is a work-in-progress and will be updated as volunteer time permits.

In 2008, a trail runner named Bernadette Benson moved from Canada to Perth and began exploring. Over the years, she became more and more curious about her sightings of plain yellow faded triangles high up on trees throughout the forest. In some sections, diamond-shaped signs, peeling, read "KATTAMORDA." In June 2017, Bernadette began piecing together the trail, which had fallen into disuse. Some sections, though beautiful, had completely grown over from lack of maintenance.

In 2018, Bernadette registered the Friends of KattaMorda (Friends of KMHT) group and began collaborating with DBCA on reviving this precious point-to-point trail. Although much labour was put in to clear several sections of trail, progress was slow. In early 2020, Friends of KMHT held their first meeting, where needs were defined and roles assigned, so significant progress could take place. As of mid 2020, the trail remains in need of remarking, but we are now a group of 18 passionate people, sharing the work.

Trail maintenance, re-marking, and rubbish collection are our primary aims at this time. 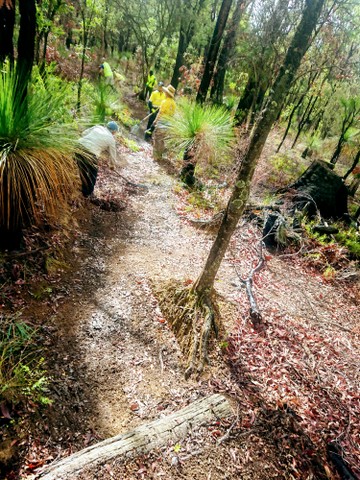